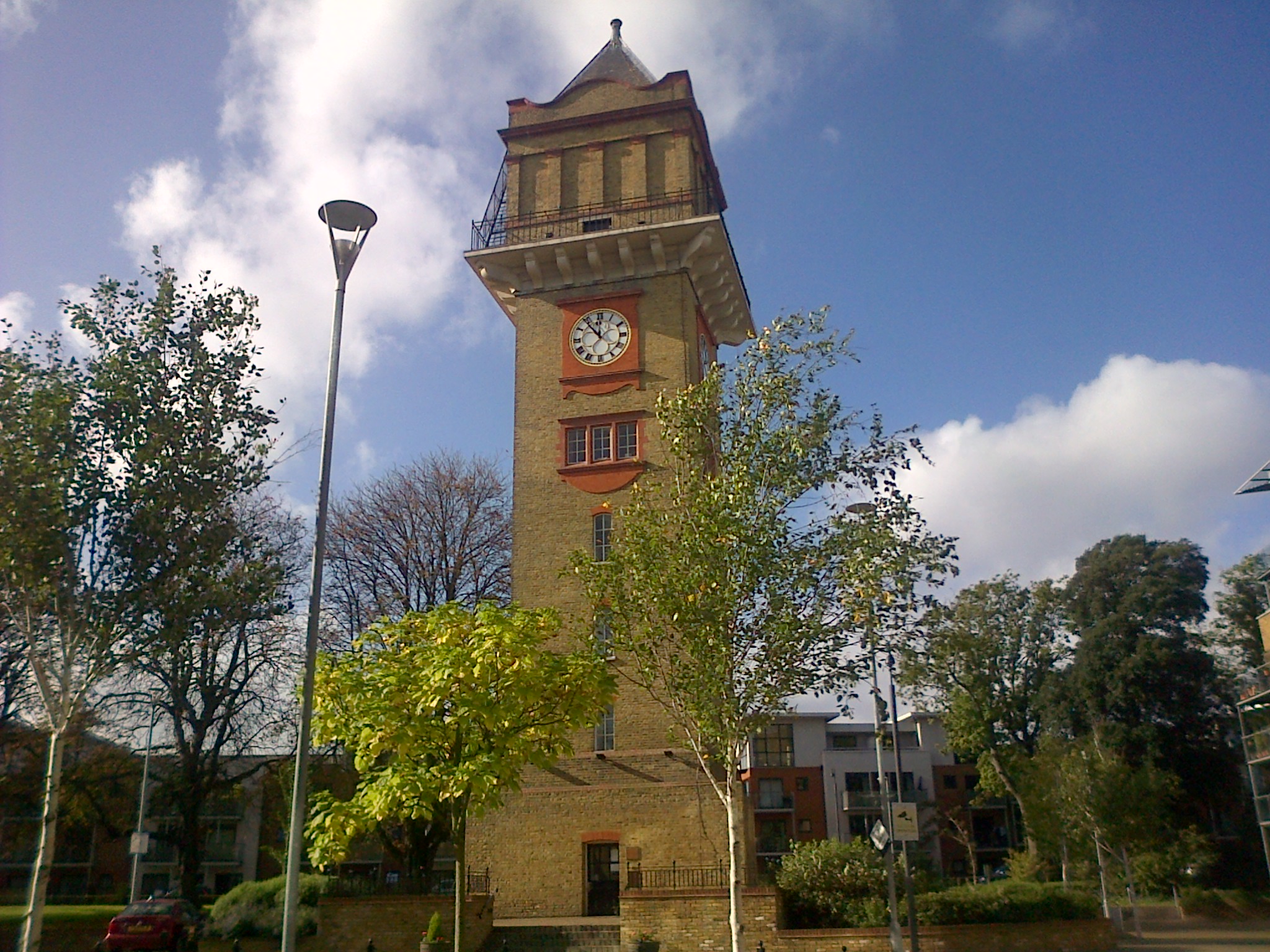 2013 has been an active year for the Hither Green Community Association (HGCA) in many ways. To begin with, we started our year with a new committee and new officers on the committee and we have endeavoured to continue the good work of the previous steering group whilst at the same time adding new ideas, improvements and activities. We have achieved the following: 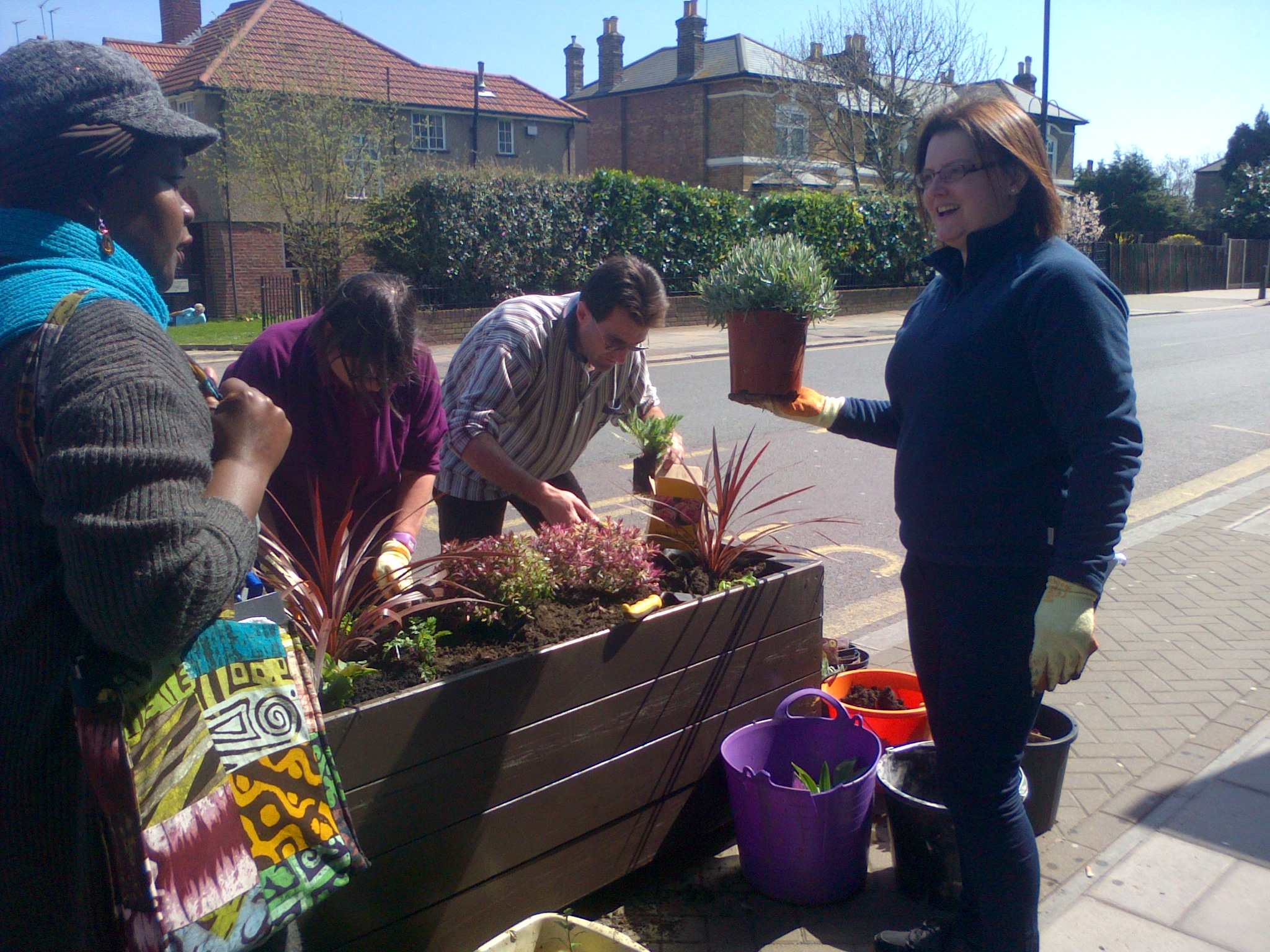 Before Christmas last year, with the help of volunteers we managed to paint the outside of the corner shop own by Barretts and cleaned up the inside. We were given the opportunity by them to sell Christmas trees during the month of December.  As it was such a success, we are repeating the exercise again this year minus the painting in the freezing cold!

In the spring, we applied and successfully won a grant of £862.00 from the Capital Clean-up project, which  is a partnership campaign led by the Mayor of London as part of his Team London volunteering programme to help Londoners green and clean our city through community engagement and participation.With this money and part of the Community First grant that we received last year we managed to put 6 planters down Hither Green Lane which we will be maintaining twice a year.  In general they have been well looked after by local shops. One will  be relocated so that it can better cared for. 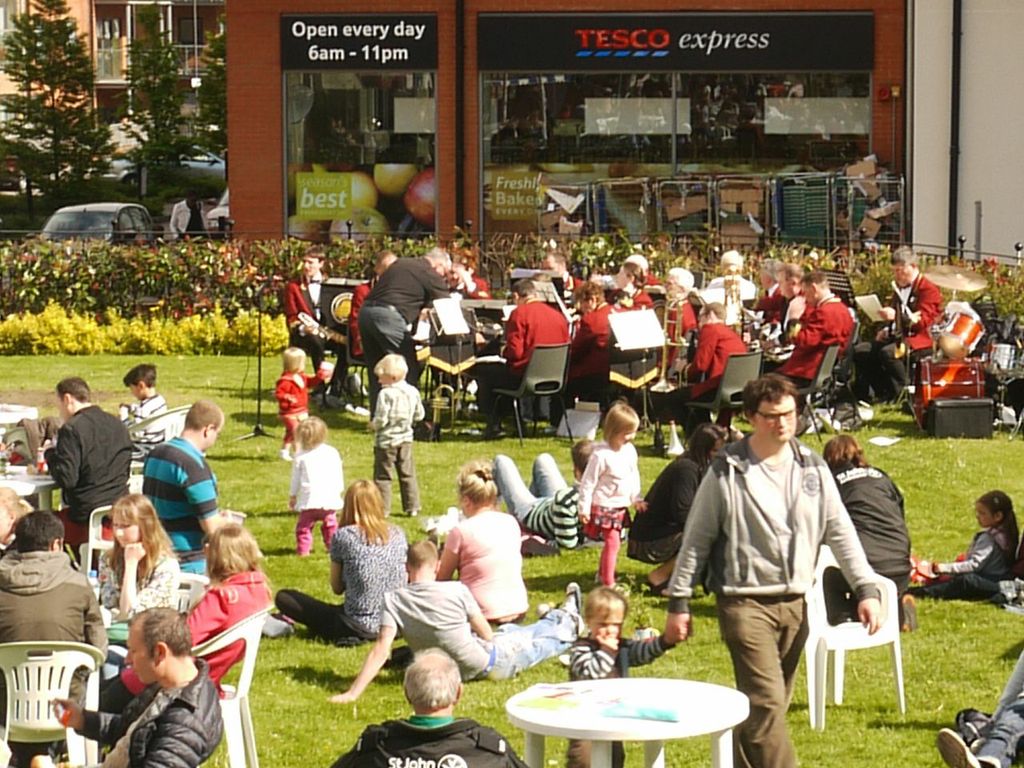 This was a great success. We co-ordinated 20 events over 9 days.  As usual we started off with the largest event, the fayre which we renamed The World Food, Arts and Crafts Fayre to reflect the diverse community which Hither Green is today.  The events, without naming them  all, represented our community in some way or another.  We endeavoured to cover the interests of people within the different age groups. There were events for children, older people, as well as those interested in film, music, food, gardening and keeping fit.

Throughout the festival, our talented artists and musicians were strongly represented and we are very keen to welcome more for future events and festivals.  This festival was filled with enthusiasm, talent and fun.  We received feedback from residents and businesses to say they got to know each other better over the festival, which is what a good community is all about.

Our thanks goes particularly to Rev. Jane Kustner who allowed us to use St. Swithun’s Church for most of our indoor concerts and activities which was a huge bonus as it is such a hub of the community.

Huge thanks must also go to London and Quadrant (L&Q), who funded a large part of the festival.  We successfully secured £3670 from their Investing in Neighbourhoods fund, which aims to build stronger communities.   The funding allowed us to organise the fayre, and run free and subsidised events.

L&Q is one of 2,000 housing associations that work in the UK. Their main purpose is to provide high quality, affordable homes.  They manage over 66,000 homes mostly in Greater London. 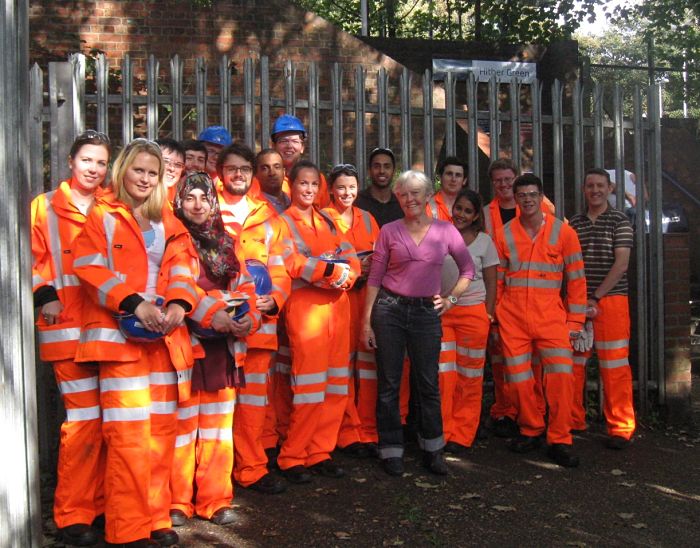 The community garden has had a difficult year due to the development still on-going behind it. The developers have been very considerate to us and helped us by either reporting unsociable behaviour or keeping the area fly tip free and as clean as possible. We have had a year of just maintaining the plants and doing as little planting as possible, because in the next 3 months it will be trampled on somewhat as the dividing wall will be built and the crane  taken away.

We intend to give the garden a facelift so that the whole of that area is finished off properly to look good and welcome people to Hither Green from the railway and public buses. During the festival, we had our usual Plant and Seed Swap session at the garden which is always enormously popular and introduced even more new faces!

The embankment has had its normal clearing sessions, planting wild flowers, new steps up the bank on the inside of the fence at the Springbank  road entrance,  and more bulbs planted this autumn – all thanks to volunteers who continue to give us their invaluable support .

In September, we were given the opportunity by Network Rail  to have 15 graduate volunteers to spend a day doing lots of bramble clearing, low branch pruning, compost bag filling as well as clearing the right hand side of the steps up to platform 1 of rubbish.  Rubbish   had accumulated there because HGCA do not normally have access to this area. However, in future we hope be able to maintain this area on a regular basis too, because Network Rail has ordered us a gate, so we can get in there and keep it clean.  The gate will be fitted when an access gate for the Fernbrook Rd. side is fitted as well.

We also have new residents at the embankment – hedgehogs!!

The website is of course our main advertising tool. The forums are also very active and report local news and views  efficiently and constantly.  A new logo for the Festival was  introduced to try and distinguish activities for the Festival from others.  We feel that this was achieved well this year as the new logo shows clarity with a urban feel.

The notice boards have always been very useful and were an important publicity tool during the festival as we were able to change the content each day to promote different events.. During the summer we put up photographs from the Festival and left them in place till mid August. Now autumn is here and there is quite a lot happening, they are now both full of future activities and business notices, etc.

Before our 2012 AGM and Open Meeting we had managed to unveil a plaque on a house in Ennersdale Rd. to Gladys Cooper who was born there. This event was very successful and organized by Ron Cooper very well who sadly died earlier this year.  We have missed him hugely; he was such a good friend of Hither Green.

We have recently lost another History of Hither Green enthusiast in Doug Earle who has lived here with his partner Audrey for many years. We will miss him also very much.  Doug was a member of the HGCA committee when it was first formed 6 years ago and  was heavily involved in the Save Lewisham Hospital movement,  and prior to this had been instrumental in saving parts of the old fever hospital such as the clock tower, which today is a unique icon of Hither Green.

Other Activities During the Year

In October we had a table at the St. Swithun’s Church Farmers’ Market where we sold home-made jams, chutneys, cakes and biscuits with a small amount of crafts thrown in. This event was a great success and the community atmosphere was a very happy one.We had a picnic at Mountsfield Park in August. A small one, but it was a very pleasant day and we caught up on the local gossip! 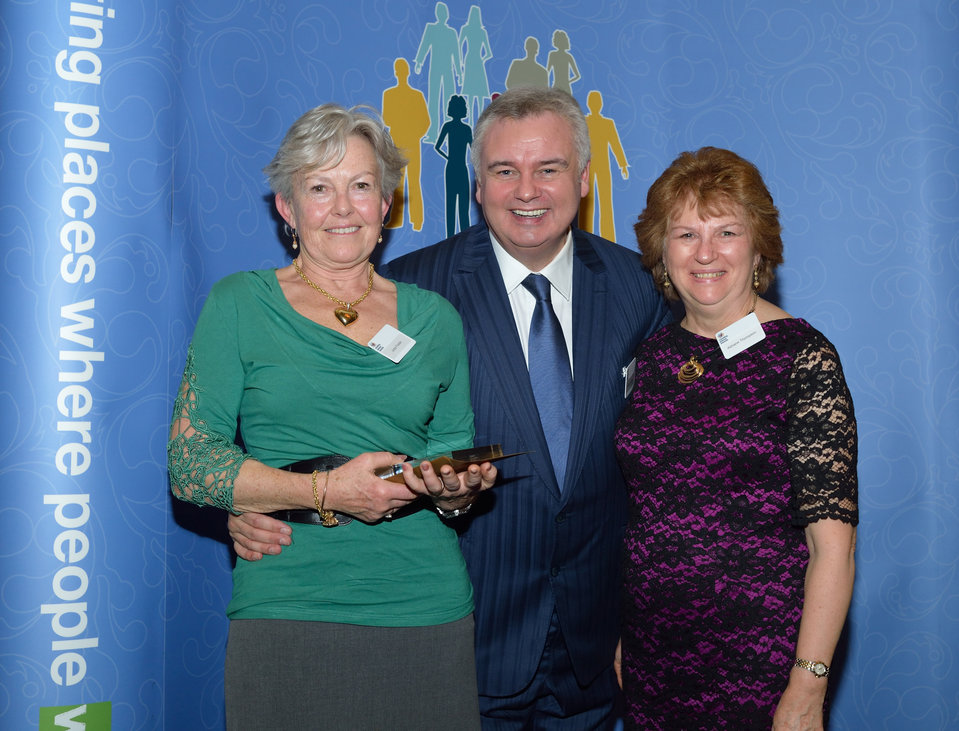 In November 2012, L&Q held their annual Creating Places Awards and gave HGCA the award for ‘Best Contribution by a Community Group.’   The award was in recognition of the work we did to coordinate the 2012 Hither Green Week,  for which L & Q  gave us funding towards, and the environmental work that we have done in creating the Community Garden and clearing the maintaining the railway embankment.

We received a prestigious glass trophy and £200. Josie and Adriane attended the award ceremony on behalf of the committee and were congratulated by Eamonn Holmes.

Funding for all our projects and activities

We have been lucky with our funding this year.  Taking on board the fact that money has been somewhat tight over the last 3 to 4 years, we had decided that we would not inflict the public purse with our largest requirement for funds being the Hither Green Festival.  So funding has been  a mixture of grants and awards from developers, public money and fundraising as follows:

Additional Funding to be Received

In addition to the above funding we have also applied for and have been granted £2550 from the Pocket Park initiative.  Pocket parks are part of the Mayor’s London’s Great Outdoors – the programme to improve streets, squares, parks, and canal and riverside spaces across London. The Pocket Parks initiative aims to deliver 100 new or enhanced pocket parks.  The funding, which we expect to receive before the end of the year, will be used to transform our Community Garden on Springbank road, once development behind it is completed.  For a summary of expenditure, please see annex 1.

The HGCA tries not to get involved with too many local issues as there are teams of experts in place to deal with those, but sometimes it is unavoidable to begin with – for instance the continuous battle against fly tipping in the area. There have been several areas that have been targeted by fly tippers.  Thankfully the majority have only had one off occurrences, but in a couple of places there have  been persistent dumps. After they are reported, the Lewisham Street clearing teams are pretty good at dealing with them as fast as possible. We have to thank the Council for their constant and loyal support. It seems there is someone out there working against us.

The street drinkers have made life difficult for residents, pupils and workers of Hither Green.  There have been several incidents this year.  This  could be   down to the lovely warm weather we had, and more people enjoying summer evenings outside. However, although drinking alcohol in public places is illegal in Lewisham, there are a small percentage of people who insist on doing it and incidents always happen when one is unprepared for reporting it to get immediate response or backup. We have managed to persuade the local sellers to stop displaying the strong alcoholic beers on the shelves which has helped a bit.

With our local issues, we are very lucky in having such attentive Councillors in Damien Egan, Stella Jeffries and Mike Harris. They have all been extremely supportive and we owe them our sincere thanks and gratitude.

We would also like to thank all our wonderful volunteers who have helped us through out the year with our green spaces.

We also owe our gratitude to all who have supported us as an Association financially, such as London and Quadrant, The Mayor of London and the Assembly of Lewisham Council.

A summary of HGCA’s expenditure is outlined below: