New documents have been published regarding St Modwen’s Leegate plans.

You can resend a previous submission or send a new submission to planning@lewisham.gov.uk giving your name and address and quoting DC/14/090032

You can read the new documents here (scoll to the bottom)

You can read our thoughts on the new documents below.

Images of arcades elsewhere are offered as examples of what we might be offered in Leegate. They look significantly unlike anything St Modwen has ever built.
They also omit the double travelator to the car park which will occupy 1/3 of the width of the arcade, the trolley park and Asda’s large entrance.

The arcade is public realm so detailed design must be be submitted and agreed as part of this application, not left to speculation.

The trolley park should be in Asda’s store, not in the arcade.

The documents offer examples of public spaces near busy roads. The spaces were built before it was known that traffic pollution was one of the biggest killers in London. Other councils have recently refused cafe’s permission for outdoor tables close to traffic on public health grounds.

Network for Clean Air’s Leegate pollution study shows how moving the public space to the centre of the site is the only way to protect people. 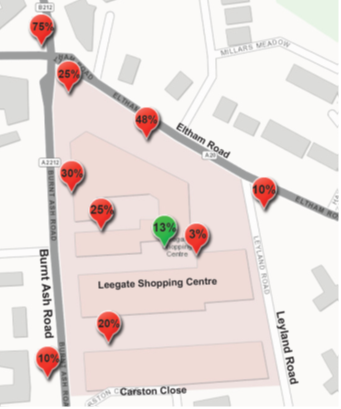 (%above (green) or below (red) legal levels of nitrous oxide)
Traffic
The new documentation does not include future predicted traffic calculations including the effects of the current Tiger’s Head junction improvements.
Accurate traffic calculations were withheld from the community before December’s strategic committee meeting despite many request for them.
This mistake  should not be repeated and the strategic committee should not meet again until accurate calculations have been made public.

Round About Now- new Mural for Lewisham Bridge